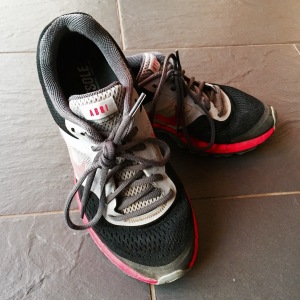 I’m in a running rut. This has happened to me before but this time round I’m beginning to panic as I’m signed up to do the Hackney Half Marathon in less than 4 weeks time (and I really don’t want to pull out of my second race of the year….hashtag-sadface).

I blame New York. It’s all New York’s fault. Although we walked our asses off (28,000 steps on one day alone you know!) and I was very happy to take a break from my weekly running regime, I’ve struggled to put my trainers on and my heart into it since we got back. And ordinarily it really wouldn’t matter much as I could ease back into regular running in the same way as I’ve had to ease back into my regular post-holiday routine. But with the Hackney Half hanging over me, and with a handful of my super-fit runner friends preparing for the run themselves, I can’t escape this (largely self-inflicted) pressure to get race-ready.

As a result, I’ve started philosophising why I run in the first place. I first started regularly ‘jogging’ (as the word ‘running’ is actually a generous and slightly misleading word when it comes to describing my pavement pounding, heavy panting technique) just after baby number 2 was born in 2007. My friend Anya coerced me into entering a 5K with the objective to run the entire race without stopping. We did it, and in addition to the flushed selfies we took afterwards, I have happy memories of that day. Thereafter I aimed a bit higher and entered a 10k the following year and then a half marathon a year or two after that.

Running helped me to shift the baby bulge. Running gave me the opportunity to listen to interesting audio books or my much neglected collection of trance albums instead of Charlie & Lola stories or the Hokey Kokey. And running afforded me a little bit of status; “Oh, you’re a runner? I like to run too. Signed up to Royal Parks yet? I did that one last year…” Running was always supposed to be fun, and for the large part, it always has been.

So why can’t I snap out of this ‘reluctant-runner’ mindset? This week I’ve started to think up new ways to trick or kick myself into feeling motivated to go running.

So despite my very best psychological efforts, I’m still feeling weary; it’s as if I’ve lost my running mojo. So what’s a girl/wobbly-woman-approaching-40 to do next….? Do I force myself to go the distance (quite literally!) and enter the Hackney Half to enjoy the accompanying sense of achievement and belonging, but knowing all the while that I will under perform and potentially dent my long term confidence? Or do I re-categorise myself as a fun-runner content on running the same routes and routines week in, week out but risk permanently damaging my morale and the chance to ever improve on my PBs? Dilemma!